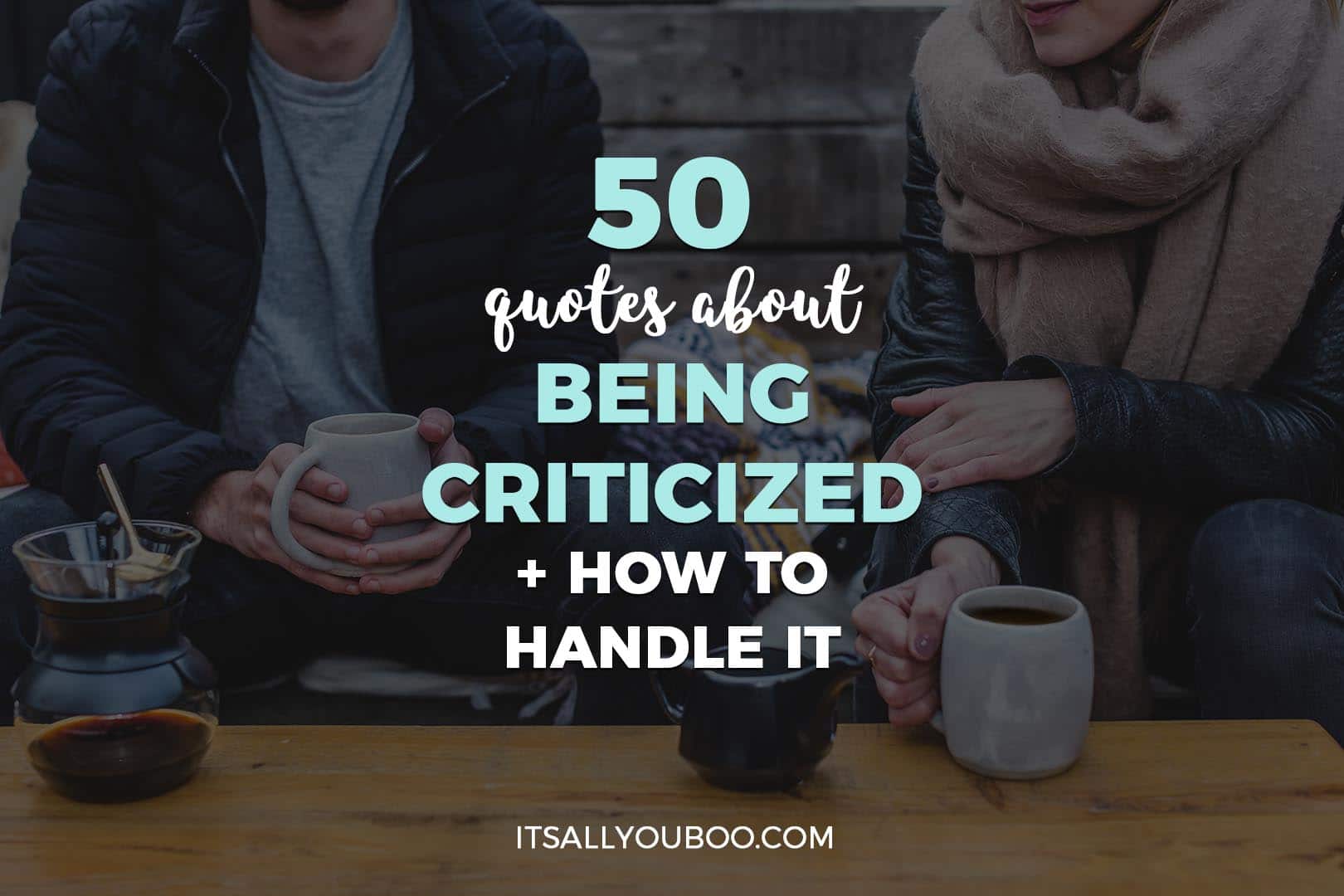 How do you handle criticism?

What are the best responding to criticism quotes?

And how do you respond to criticism? Do you retreat, run or react?

You know what it’s like. You’re just living your life, doing your thing and then out of nowhere someone comes at you with very intense language scolding you.

For reals though, it’s startling at first. Especially when the criticism comes from someone you don’t even really know or is a complete stranger. Troll much?

Where’s the constructiveness in that?

And is it different, or should you feel differently when that criticism comes from someone you know and dare say love or are friends with? Should well-meaning criticism be well received?

How do you handle constructive criticism? Can criticism even really be anything but destructive?

Are you supposed to be all, “thank you, criticize me again please.”

I’ll be honest, I usually don’t react well in either case. Maybe it’s just been too many years since I’ve had a professor or TA red pen my papers so I’m just out of practice.

My initial reaction to criticism is usually not the best and I go straight to defense. “Why? No… It’s not, I’m not.” Fighting for my honor like I’m pleading in court.

What can I say other than this dream, this goal, this entrepreneurial life I’m pursuing can feel so fragile even on the best day. I’m tired, working SUPER hard to maintain my blog, create courses and dare I say make a living. It’s a lot and the last thing I need is someone telling me how crappy I’m doing at it. *exhale*

So, to deal with my “criticism of criticism” issues and to learn how to take criticism I’ve collected 50 quotes about being criticised and how to handle criticism. And you can learn to deal with criticism more positively too. 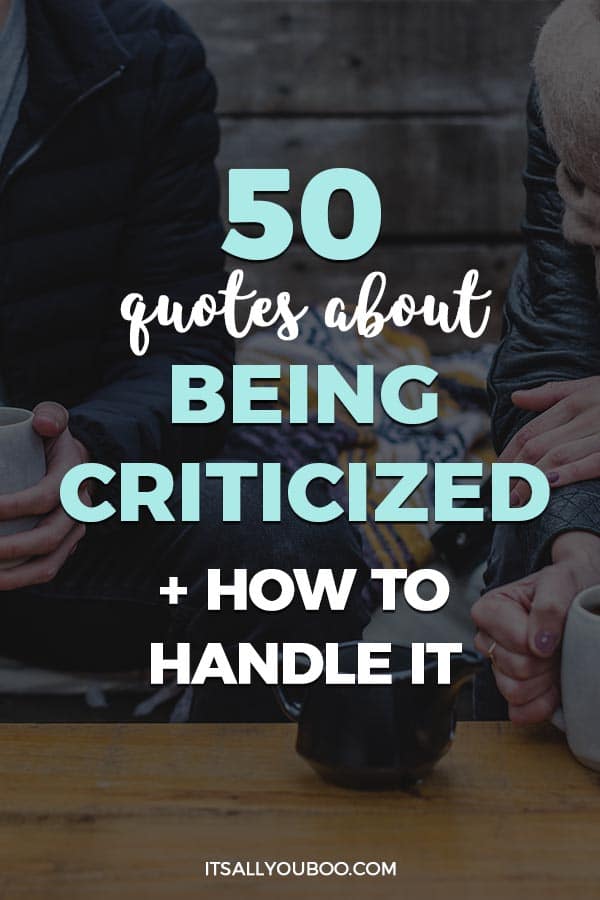 Criticism Will Happen Regardless

You can’t avoid criticism. No matter what you do, someone is going to have an issue with you. You handle criticism by realizing it’s not personal, it’s just part of doing your thing. The only way to not receive criticism is to do nothing, never try and be no one.

“There is no defense against criticism except obscurity.” ― Joseph Addison

2. “There is only one way to avoid criticism: do nothing, say nothing, and be nothing.” ― Aristotle 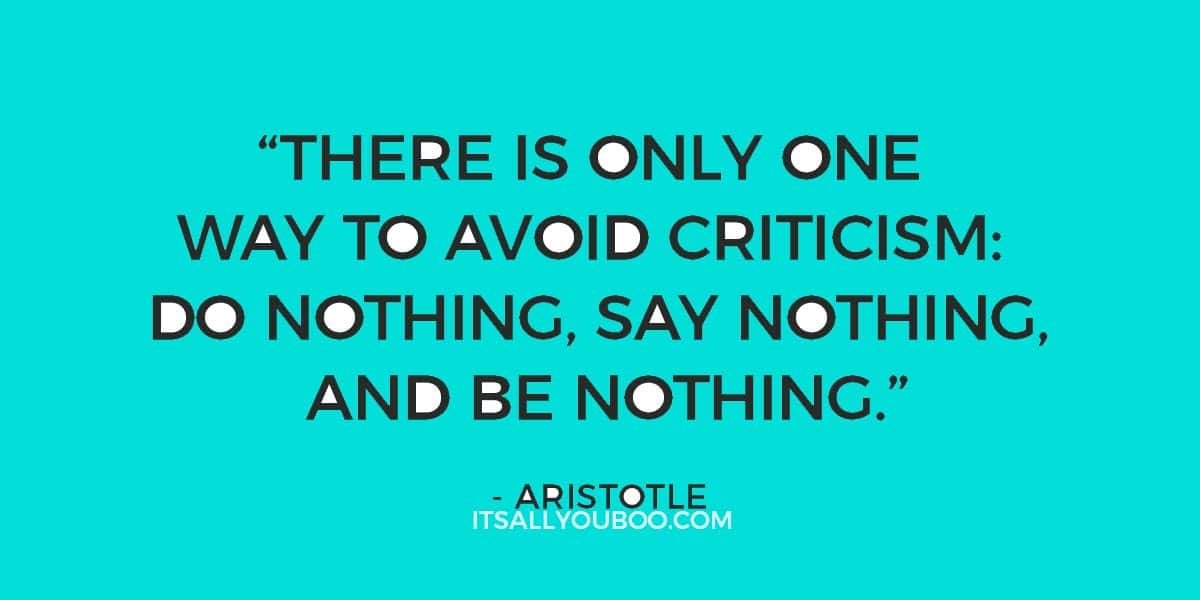 “Whatever course you decide upon, there is always someone to tell you that you are wrong. There are always difficulties arising which tempt you to believe that your critics are right. To map out a course of action and follow it to an end requires courage.” ― Ralph Waldo Emerson

5. “You have enemies? Good. That means you’ve stood up for something sometime in your life.” ― Winston Churchill

Haters gonna hate, that’s what they do! Expect it, and ignore it. Once you refuse to be offended by or even take notice of what they say you can’t be hurt by it. Have confidence in yourself and don’t let it taint your reality.

“Pay no attention to what the critics say. A statue has never been erected in honor of a critic.” ― Jean Sibelius

7. “Nevermind what haters say, ignore them ‘til they fade away” ― TI 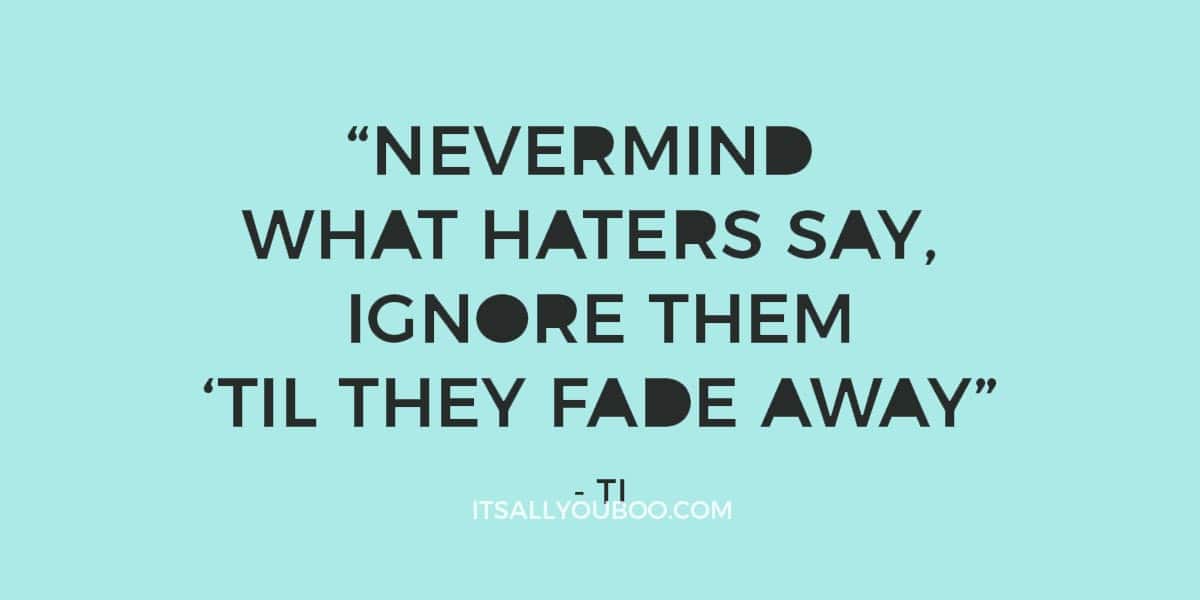 8. “Why should we worry about what others think of us, do we have more confidence in their opinions than we do our own?” ― Brigham Young

“Don’t be distracted by criticism. Remember, the only taste of success some people have is when they take a bite out of you.” ― Zig Ziglar

10. “Someone else’s opinion of you does not have to become your reality.” ― Les Brown 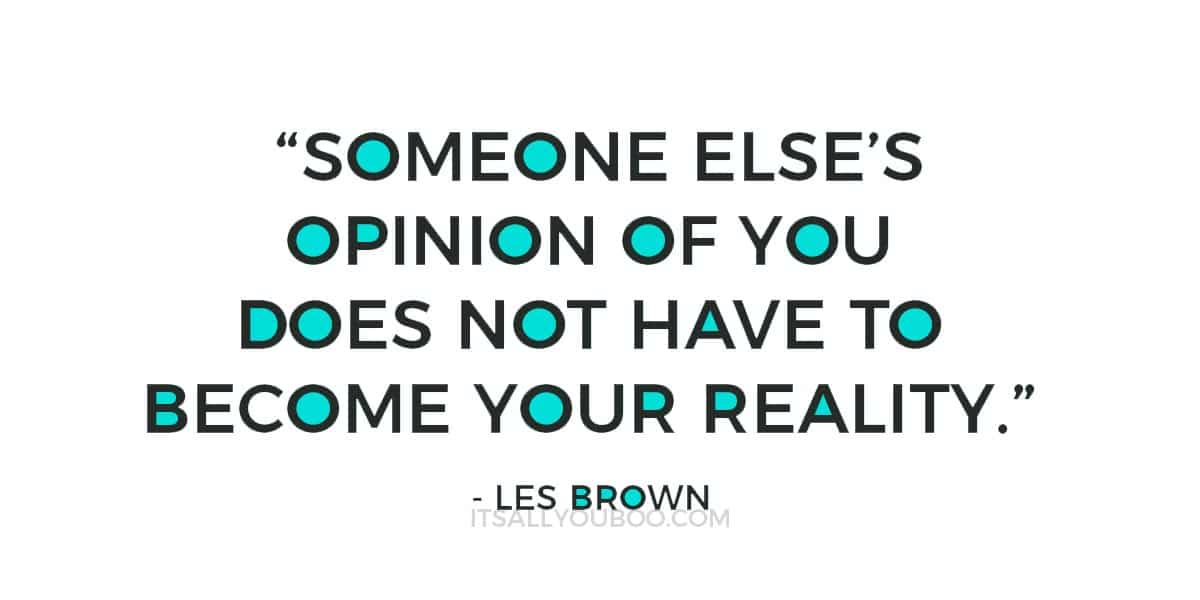 You Determine Your Value

True self-esteem and a strong sense of self-worth come from within, not without. Whether or not someone values you or thinks well of you or not, can’t impact your value. Only you can do that.

11. “Well, we all know that self-esteem comes from what you think of you, not what other people think of you.” ― Gloria Gaynor

12. “Once you embrace your value, talents and strengths, it neutralizes when others think less of you.” ― Rob Liano

“Remember the world will judge you based on how you judge yourself.” ― Vincent Mueller 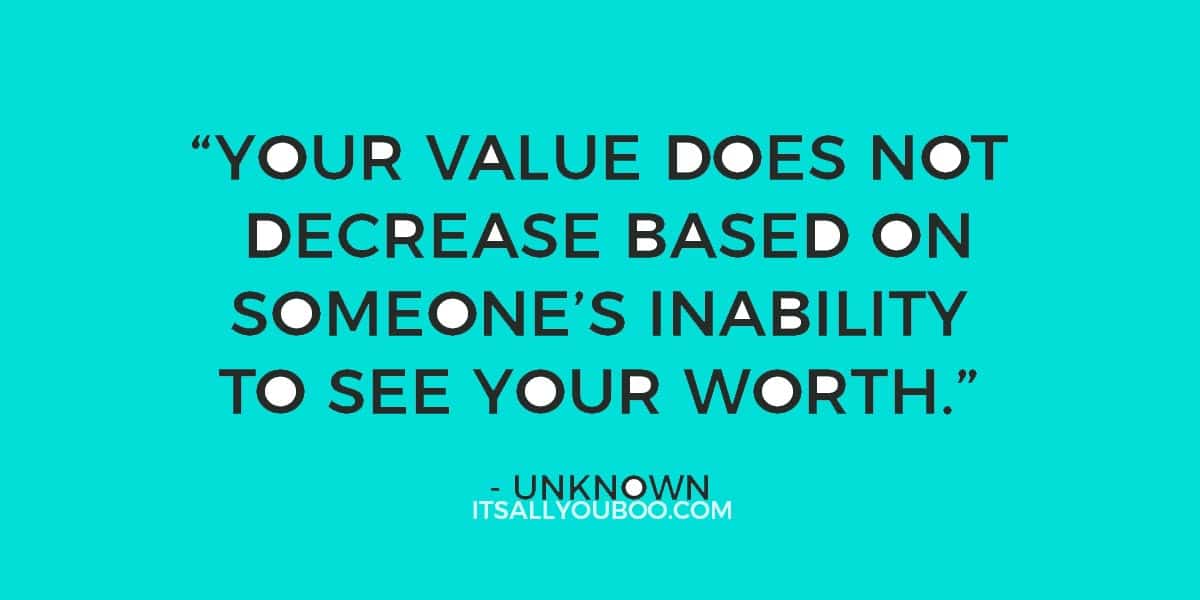 14. “Your value does not decrease based on someone’s inability to see your worth.” ― Unknown

15. “If you really put a small value upon yourself, rest assured that the world will not raise your price.” ― Unknown

Tips on How to Respond to Criticism

Ouch, criticism can be harsh sometimes (even if it’s “valid”), so how to take it? It’s all about how you react and respond if you choose to. Give a compliment, smile, be kind, don’t get defensive. Always consider who and why you’re being criticized, and learn from it you can. If not carry on!

“If someone criticizes you, give them a compliment.” ― Debasish Mridha

17. “Don’t mind criticism. If it is untrue, disregard it; if unfair, keep from irritation; if it is ignorant, smile; if it is justified, it is not criticism, learn from it.” ― Anonymous 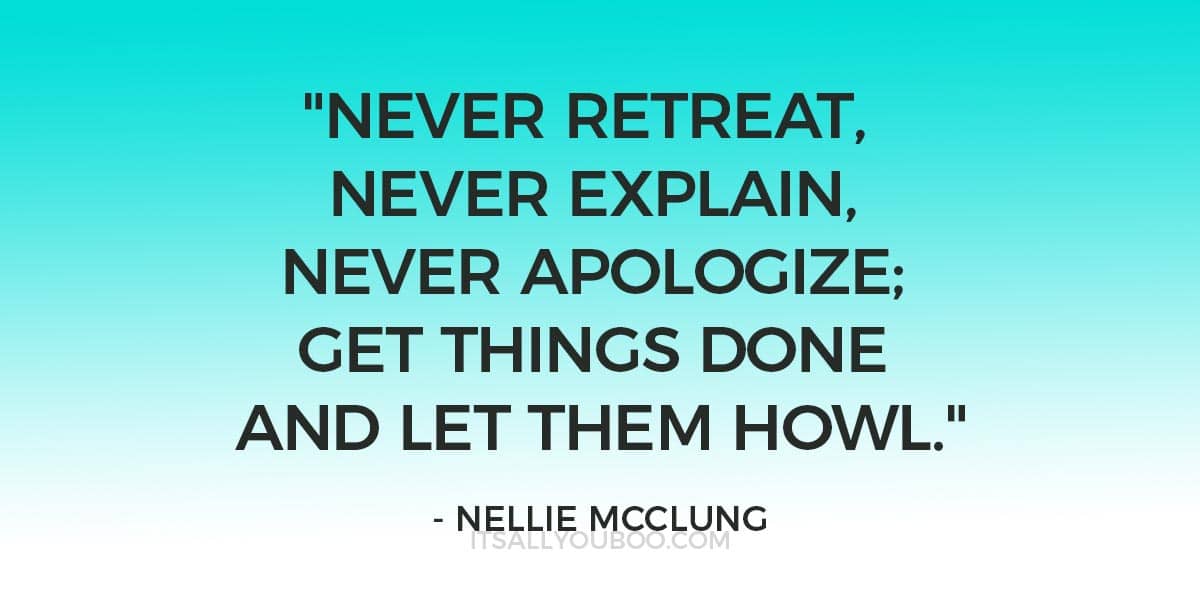 “When criticized, consider the source.”― Unknown

“The final proof of greatness lies in being able to endure criticism without resentment.” ― Elbert Hubbard

They Just Don’t Get You

Everyone who has done anything in this world has been criticised or worse. Not everyone is going to get what you’re trying to accomplish or be able to stand by you. Don’t ask for permission and ignore their little minds and don’t let it diminish you.

24. “All that was great in the past was ridiculed, condemned, combated, suppressed — only to emerge all the more powerfully, all the more triumphantly from the struggle.” ― Nikola Tesla

25. “Never dull your shine for somebody else.” ― Tyra Banks 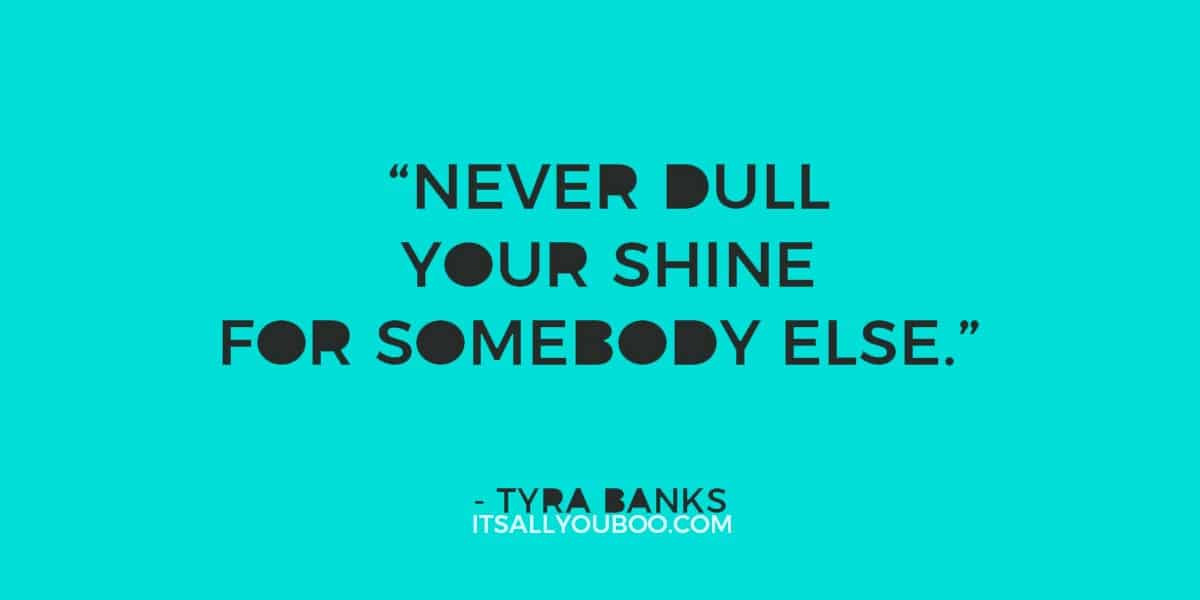 26. “You are not what others think you are. You are what God knows you are.” ― Shannon L. Alder

“If you want to achieve greatness stop asking for permission.” ― Unknown

Praise or Criticism, Just Do You

Don’t do it for praise or for criticism, do it for yourself. Praise and criticism are opposite sides of the same coin, either way, don’t let it get to your head or your heart. Praise can sometimes be as harmful as criticism if you don’t take it well.

29. “I pay no attention whatever to anybody’s praise or blame. I simply follow my own feelings.” ― Wolfgang Amadeus Mozart

30. “Don’t waste your energy trying to change opinions … Do your thing, and don’t care if they like it.” ― Tina Fey 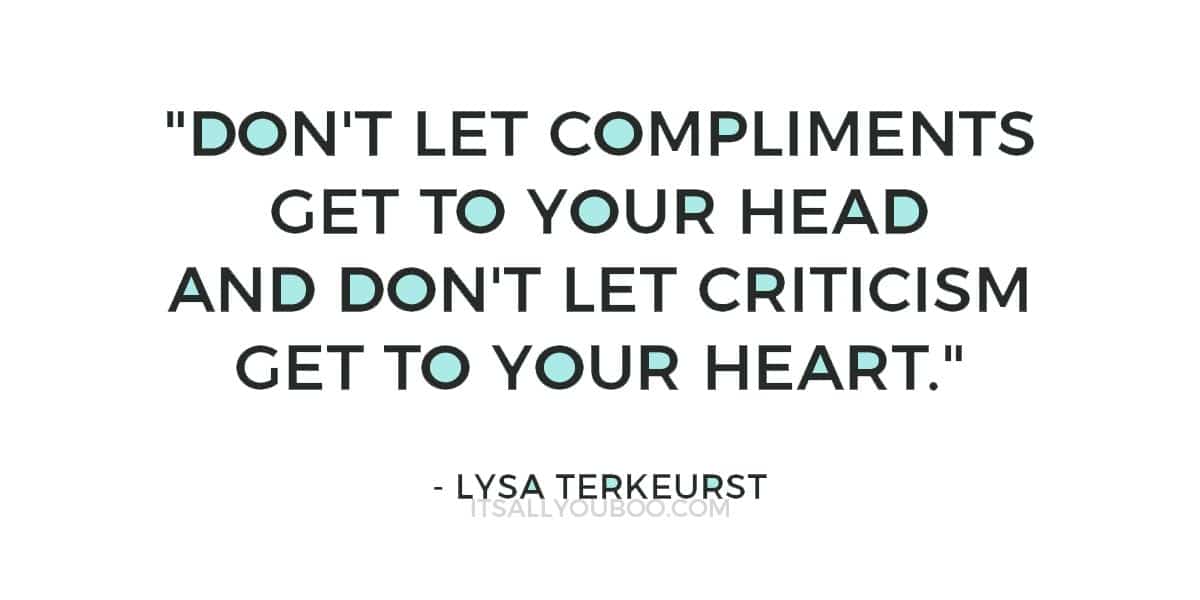 “You can’t let praise or criticism get to you. It’s a weakness to get caught up in either one.” ― John Wooden

33. “I have already settled it for myself, so flattery and criticism go down the same drain and I am quite free.” ― Georgia O’Keeffe

Criticism Can Be Constructive

Not all criticism is “bad” or harmful. Criticism can drive you to be better, stronger, but when delivered gently and with the aim of being constructive, not destructive.

“Criticism, like rain, should be gentle enough to nourish a man’s growth without destroying his roots.” ― Frank A. Clark

35. “Criticism may not be agreeable, but it is necessary. It fulfills the same function as pain in the human body. It calls attention to an unhealthy state of things.” ― Winston Churchill

36. “Every human being is entitled to courtesy and consideration. Constructive criticism is not only to be expected but sought.” ― Margaret Chase Smith 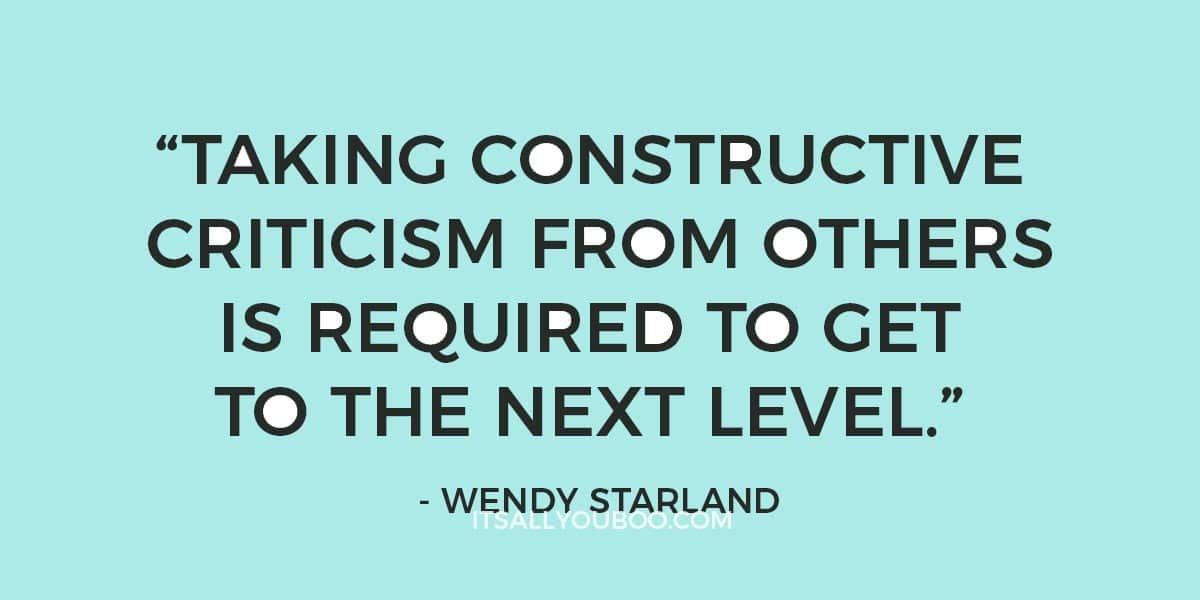 37. “Taking constructive criticism from others is required to get to the next level.” ―Wendy Starland

“Learn to see the difference between constructive and destructive criticism.” – Anonymous

39. “The trouble with most of us is that we would rather be ruined by praise than saved by criticism.” ― Norman Vincent Peale

If you must criticize, be sure you’re doing it with the right heart and with the intention of helping.  Do not criticize what you do not understand or have no experience in. When giving constructive criticism, be sure to deliver with praise.

40. “When we judge or criticize another person, it says nothing about that person; it merely says something about our own need to be critical.” ― Unknown

“It is much more valuable to look for the strength in others. You can gain nothing by criticizing their imperfections.” ― Daisaku Ikeda

42. “One mustn’t criticize other people on grounds where he can’t stand perpendicular himself” ― Mark Twain 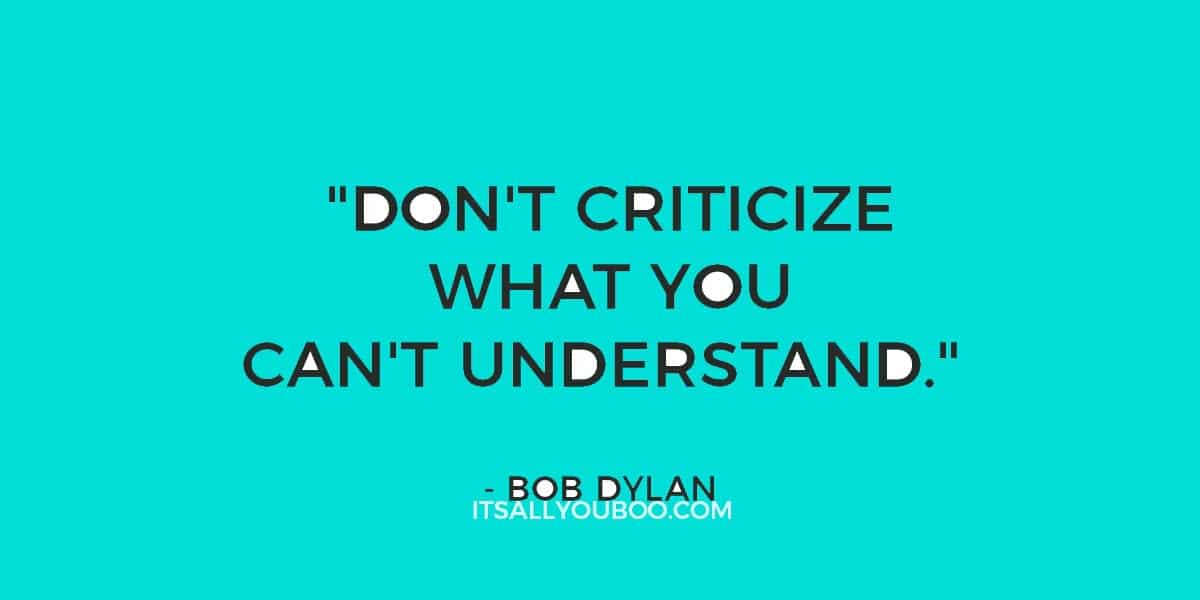 “He has a right to criticize, who has a heart to help.” ― Abraham Lincoln

45. “If we are bold enough to point out problems, we must be brave enough to try to solve them.” – Robert Alan Silverstein

Greater change and progress come from being encouraged than by being criticised. Surround yourself with those who encourage you and give encouragement rather than criticism to those in your life. 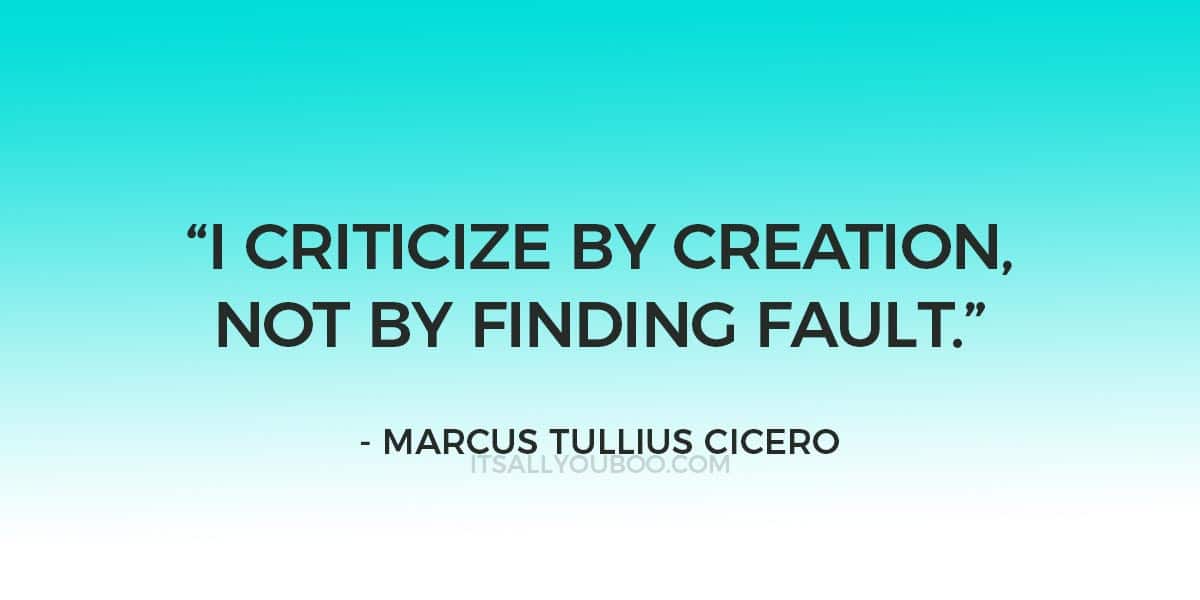 48. “I criticize by creation, not by finding fault.” – Marcus Tullius Cicero

“Who do you spend time with? Criticizers or encouragers? Surround yourself with those who believe in you. Your life is too important for anything less.” – Steve Goodier

How to Deal with Criticism Positively

You cannot control what anyone says to you, not a superior or boss at work, not a client or customer if you’re an entrepreneur, and definitely not a stranger and internet trolls. But, you can control how you react, receive or return it and respond to criticism.

But, dealing with criticism positively is only possible if you’re good with you, confident in what you’re doing and going to keep on keeping on no matter what opposition, criticism and hate mail you receive.

Sign up below,  plus get 12 Printable Affirmations to help you stay positive no matter what anyone says to you. 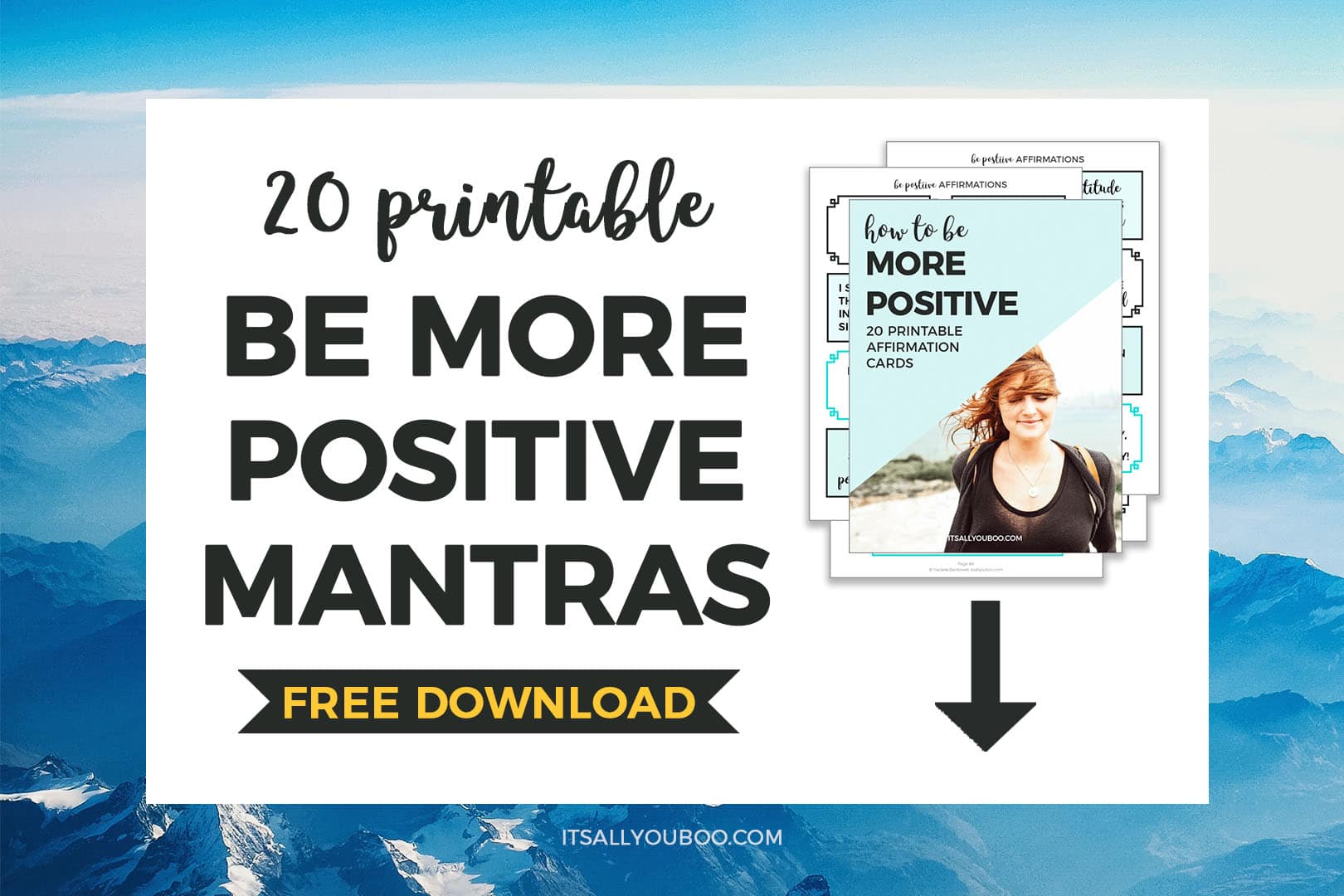 Sign up below for 20 FREE Printable Affirmations + weekly tips to help you slay your goals.

Mantras are an amazing way to train your mind to focus on the positive (or build up your “positivity instincts”). The more you say them and repeat them in your mind the more natural being positive, and reacting positively in the face of criticism becomes.

Just print, cut and keep these positive affirmations where you can see them. From on your office wall, as a bookmark, or taped to the side of your monitor or ever to your bathroom mirror.

Remember, it’s all about your mindset and perspective, be good no matter what criticism you face.

When you’re good with you, it doesn’t matter what anyone says to you.

How do you handle criticism? Do you react, respond or retreat? Click here for 50 quotes about being criticized. Plus, get FREE Positive Affirmations. #Haters #BeYourself #PositiveVibesOnly Click to Tweet

How to handle criticism?

Get Your 20 Positive Affirmations

Subscribe to our VIP newsletter, plus get the free affirmations.